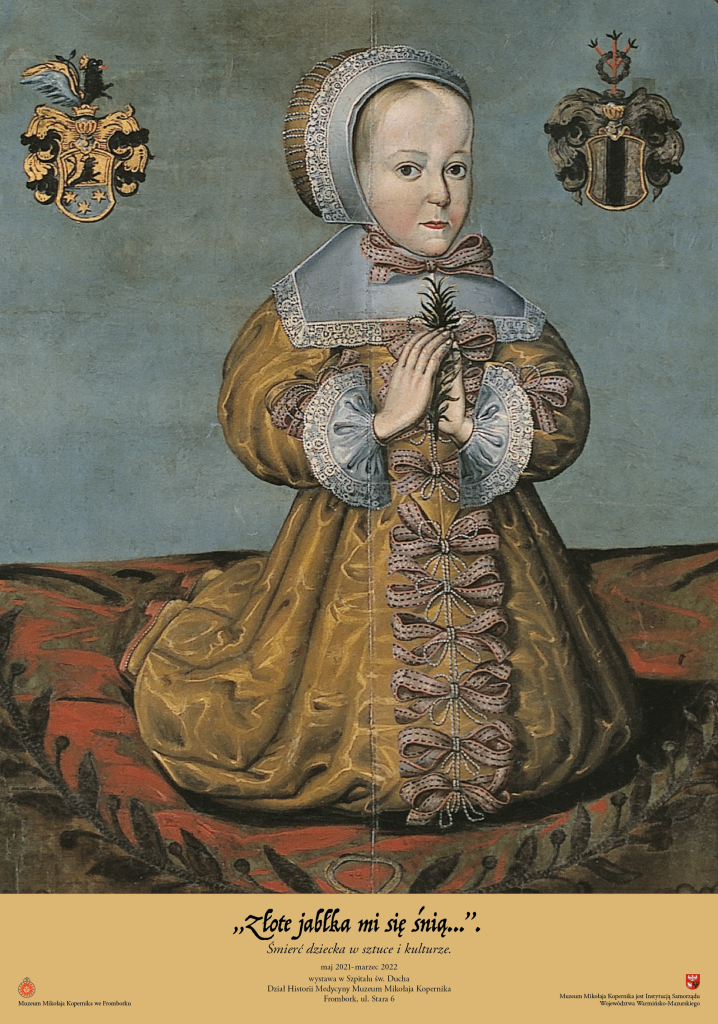 The death of a child is an experience so powerful, so incomprehensible, that it seems impossible to capture it in a shape, word, or image.

It turns out, however, that for hundreds of years, people face with the experience of their children dying needed that „something” to express this seemingly unimaginable experience with a form and content, portraits and poetry, gestures and rituals. Taking up the subject of this exhibition, we were aware of its uniqueness, forcing the creation of a display that was particularly sensitive, but also important, as it was woven from the subtlest feelings, reaching back to events only seemingly long past.

The title „Golden apples I dream of… The death of a child in art and culture” uses a quote from Threnody I by Samuel Twardowski, who wrote it after the death of his daughter Marianna (died before 1634). The motif of golden apples refers to heavenly happiness – unattainable for the poet in the face of the loss of a child. The theme of apple trees or apples (metaphorical or real) was a popular, repeated, recalled phrase/symbol/literary, ritual, and artistic reference, associated in many regions of Europe with a deceased child. In folk beliefs, berries and apples were seen as the food that Mary, Mother of God feeds dead children in Paradise. Hence, in some regions of Poland, women who lost their child were forbidden to eat blueberries until the feast of Our Lady of Berries (July 2) and to eat apples until the feast of Our Lady of Herbs (August 15), because there might not be enough fruit to feed the deceased children. Golden apples were sometimes part of the grave goods for children, e.g. in Baden or in Masuria in Dąbrówno (children were to play with these apples in Paradise). Thus, the apple – along with concepts such as a flower or a twig – was one of the most important symbols associated with the death of children, which is why we have displayed it not only in the title of the exhibition but also in the scenery.

The first part presents heavenly intercessors who, in folk devotion, gained great popularity as patrons supporting childhood diseases and having the gift of caring for pregnant women. The portrait gallery of these saints is represented by paintings and sculptures borrowed from, among others, churches in Henrykowo, Płoskinia, Wozławki, and Radziejewo. In this group, a huge role was played by St. Walenty – an extremely popular patron of epilepsy (including childhood epilepsy) and St. Vincent Ferrerius or St. Antoni Padewski – resurrecting the deceased and miraculously healing many childhood illnesses. An important role was also played by the Guardian Angel – the guardian of the child in its life, in a spiritual journey through the sinister and dangerous world through temptations of sins. On the other hand, the dark and fear-filled space of female parenthood (the longed-for pregnancy; the dangers of difficult, complicated births; the specter of health complications of an infant or death after childbirth) was cared for by St. Anna and St. Margaret. This part of the exhibition also presents two votive paintings from the Sanctuary of St. Anna in Smardzewice and the Sanctuary of Our Lady of Gidle in Gidle. By recording the complex specificity of a votive gesture, these votive offerings illustrate specific situations in life (clinical death of a child and epidemic plague) against the background of the historical and social panorama of human history, entangled in a centuries-old fear of diseases and plagues coming from an unknown, unexplored area – the area of mystery…

The second part of the exhibition is filled with artefacts presenting various ways of portraying a deceased child. The most important object here is Europe’s only surviving children’s tombstone banner of Botho Ernst zu Eulenburg (1664), originally from the Evangelical church in Galiny (now in the W. Kętrzyński Museum in Kętrzyn). This extremely beautiful portrait of a three-year-old boy holding a rosemary sprig expresses an extremely strong need for parents not only to preserve the iconographic epitaph formula but also to retain the „animated image” of their lost son in their memory. This part also presents a 16th-century epitaph (from the church in Łabędnik) showing the deceased young man from the Konnacher family in a popular convention using the symbol of death: a miniature cross placed in his hands folded in prayer. Interestingly, the 17th-century epitaph from the West-Kashubian Museum in Bytów, also present at the exhibition, uses a substitute image instead of specific portraits of children – a delicate clover flower with three buds symbolically representing the dead sons of the Thunyami marriage: Jakub Stefan, Gotfryd and Dawid Krystian.

The death of a child was also “told” in a seemingly trivial, light, ironic way, as evidenced by the 18th-century drawing by Cornelis-Henricus van Meurs from a private collection in Warsaw, showing a boy and a girl blowing soap bubbles (symbolizing the fragility of life). The joyful children, through the very fact of unconscious play, which ominously whispers about the nothingness of a happy moment and the illusion of unshakable duration of „what is good”, move the viewer unimaginably strongly. Delicate, subtle soap bubbles with fleeting smoke and quickly fading flowers – other symbols of passing are also a portrait attribute of a child on the outstanding epitaph of Ernest Reichart von der Olsnitz (1657) from the Kwidzyn Cathedral. There are no examples of children’s sepulchral art at the exhibition. However, we referred to it by the images of a „putto with a skull” (from the church in Kwiecewo and the collection of the Nicolaus Copernicus Museum in Frombork). The iconographic motif combining a lying/sleeping putto with a skull has become one of the most popular themes in the Polish Renaissance and Mannerist children’s tombstone sculpture. The skull turns into a surprising, apparently harmless toy, sometimes acting as a pillow or a support on which a plump baby body rests.

The third part of the exhibition introduces the viewer to the funeral rituals characteristic of children’s burials. Rituals were the act of the final parting and farewell, taking place in a church, chapel, or cemetery. These ceremonies – in terms of content and visuals – were extremely capacious: they could be a substitute for a wedding, protection of the family from possible vampirism, sometimes they ensured continuity of mother’s care to the child or allowed careless fun in the afterlife… The main element of this part of the exhibition is a coffin with a 17th-century coffin portrait of the EMP girl from the Gniezno Archdiocese Museum, placed on 18th-century bases in the form of lions from the Sanctuary of St. Antoni Padewski in Ratowo. This stylized catafalque, referring to the Sarmatian formulas of funeral celebration, is complemented by two additional, antique coffins from the Institute of Archeology of the Nicolaus Copernicus University in Toruń and the Museum – Kashubian Ethnographic Park in Wdzydze Kiszewskie.

A separate group of objects are the relics found during archaeological research (coins, jewelry elements, a bottle with mysterious contents, fragments of funerary wreaths, etc.) from the Folk Culture Museum in Węgorzewo and the Institute of Archeology of the Nicolaus Copernicus University in Toruń. The unexpected „decorativeness” of funeral rituals is illustrated by the modern „crowns of death” consoles from the Museum of Middle Pomerania in Słupsk. It is a complementary element of the popular custom of hiding unmarried people in wreaths and crowns. The specificity of children’s burials is also illustrated by the copies of extremely colorful children’s grave costumes, as well as authentic pieces of clothing excavated during archaeological research, with the dominant presence of very touching children’s caps. The exhibition is completed by expressive photograms of archival photos (from the collections of the Museum of Folk Culture in Węgorzewo and the Museum in Przeworsk) depicting a deceased infant and the family holding a wake for the dead girl. Black and white photographs play the role of a personal record of a special moment, a moment of the parents’ drama – suspended between a state of doubt and a dark void. At the same time, they are becoming the most important document, registering folk funeral customs, including the way a deceased child was dressed or the belief in the apotropaic power of some plants, herbs, and flowers.

This is the final space of the exhibition, although it visually expands and is closed by the 19th-century figure of a Cemetery Angel from the collection of the Nicolaus Copernicus Museum in Frombork, displayed in the hospital chapel of St. Anna, next to which there is a modest, very meaningful, child funeral coffin from the church in Henrykowo. 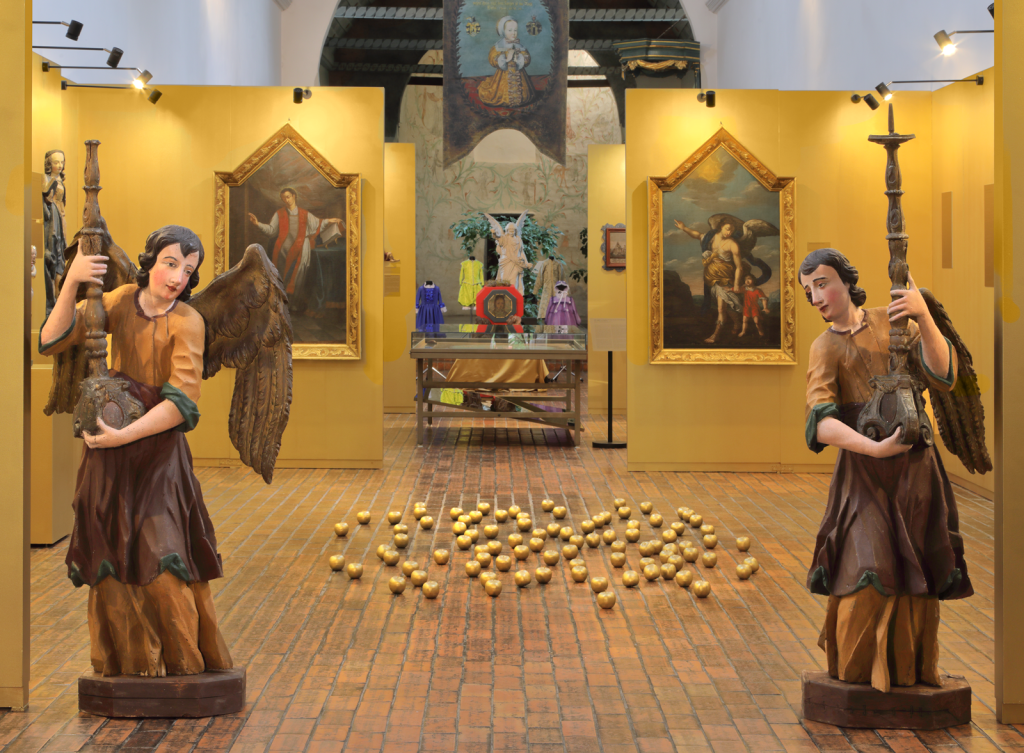 We would like this exposition not to become only a „cemetery” or an unequivocally „mourning” exhibition. The feeling of loss, which is undoubtedly dominant, opposed with or dressed in gold, is supposed to give the impression of being in Paradise, in the Kingdom of Heaven, that is, in the place where the souls of baptized children were to dwell after death. We hope that the proposed exhibition will move the viewers and make them realize that there is so little time to appreciate life…