An instrument which demonstrates a rotation of the Earth.
It is named after a French physicist J. B. L. Foucault who was the first to make that experiment in 1851. He took into consideration a fact known in physics that that a plane of the pendulum swings does not change in space. Than if the Earth did not move, the pendulum would move in a plane which would not change its position in relation to the surface of the Earth.
The experiment stated that a plane of the swings was slowly rotating from the east to west in relation to the surface of the Earth, consequently our planet must rotate. 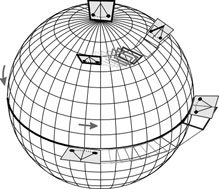 The pendulum loosely suspended over the earth pole continously changes a plane of the swings, showing in this way that the Earth revolves. In lower latitudes a change of the direction of the swings comes slower, on the very equator, however, it does not occur at all. 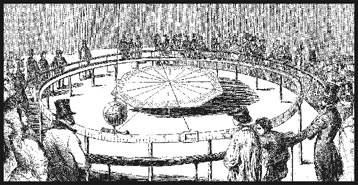 The experiment, made in 1852 by Foucault at Pantheon, in Paris.
Contemporary picture.