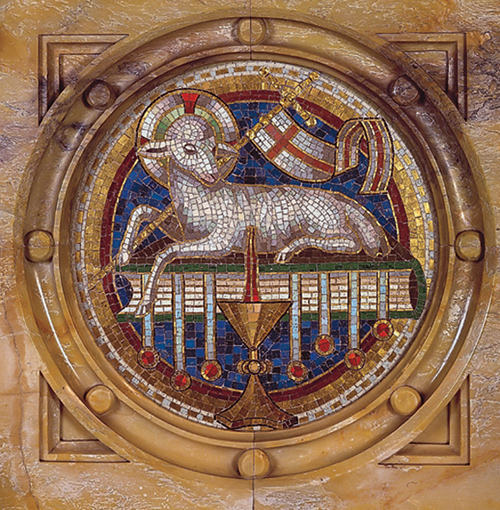 The year 2013 entered into the history of the Warmia Archdiocese of Warmia and Mazury Province as the year of important anniversaries and jubilees.Exactly 770 years passed from the moment of establishing the Warmia Diocese, 400 years from the death of the blessed Regina Protmann, the founder of the Congregation of the Sisters of St. Catherine Virgin and Martyr in Braniewo, 540 years from the birth of Canon Nicolas Copernicus and 470 years from His death.All anniversaries are embedded in the experience of Christian faith and in daily life of Warmia inhabitants.

Witnesses to history, culture and faith are the objects of sacral art presented within the frames of the solemn exhibition, organized by the Nicolas Copernicus Museum in Frombork in collaboration with the Warmia Archdiocese Museum in Olsztyn. Once again we experience the material expression of a very special triad: fides-ratio-ars.The exhibition titled 770 years of Warmia Diocese (770 lat Diecezji Warmińskiej), being a herald of a larger exhibition planned by both museums for the year 2014, presents chosen, most precious pieces of sacral art. The complex of exhibits, enclosed within chronological time-frames between 14th and 19th centuries, consists of: relics of goldsmith?s craft (in a large part belonging to the treasury of the Frombork Cathedral), sculptures, paintings, canonicals and prints. Presented objects are often related to some luminous bishops of Warmia, who were their donators and users (e.g. the cup founded by the bishop Henryk Sorbom in the year 1379, or the old print with the coat of arms of bishop Łukasz Watzenrode). 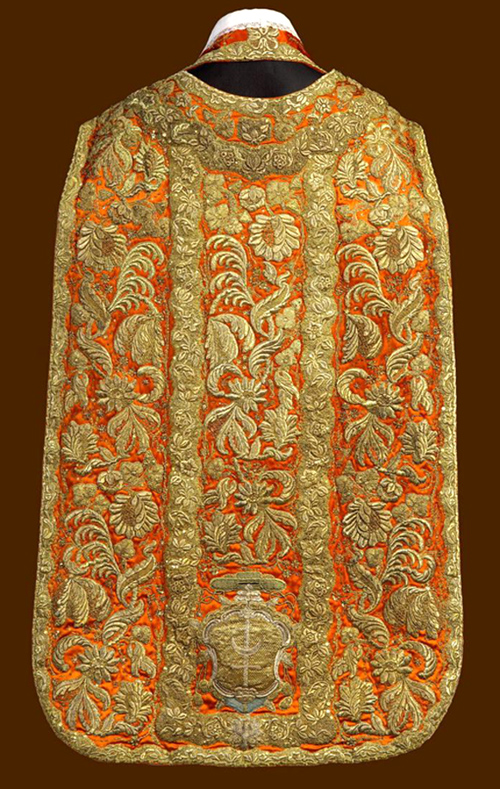 All these objects describe in a way the space of faith – fides of the Christians, who have supported through the ages the culture of Warmia. They allow us to study the state of knowledge – ratio of the theology, but also show the educational level and acquaintance with European artistic trends – of the artists themselves and of the bishops of Warmia and of the chapter of the Cathedral. „Fides et ratio” find their focal point in „ars” as if in a prism. The works of art chosen for this exhibition reflect the meaning of Warmia-region culture, point to the routes leading from Frombork and Lidzbark Warmiński to Gdańsk, Toruń and Rome. Present local workshops and their importance for coeval Europe.

After Teutonic Knights had subjugated Prussia, Pope Innocent the 4th advised the legate Wilhelm of Modena to arrange the churchly organization of Prussia lands. On 4th of July 1243 Wilhelm of Modena presented the Pope with a plan of Prussia’s division into dioceses. This was approved and sanctioned by the Pope’s bulla of 29th July the same year. By the power of this document 4 dioceses were created in Prussia: Chełm, Pomezan, Warmia and Sambia. Among those dioceses the largest as to the area was the Warmia diocese, which comprised the entire Central Prussia. 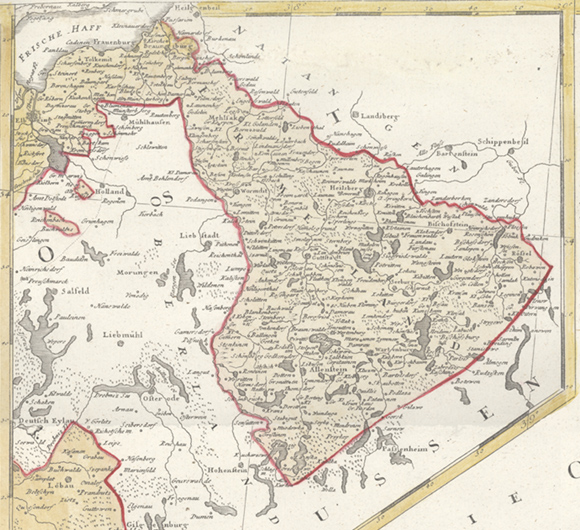 The bondary of Warmia diocese ran on the North along Pregoła River to the city Wystruć, from here to the south along Węgorapa River, then to the east, by Mamra Lake to the border between Prussia and Lithuania, and finally along the Lithuania and Prussia border with Masovia to the Omulew River. From here the bondary took direction to the north-east along the Omulew River and Lake towards Kurki Village, then to the west by Pluski Lake to Pasłęka River and again to the west along Wąska River to Drużno Lake, and along the river or the Elbląg Chanel to the Lagoon of Vistula. From the north-eastern side the border of the diocese was the coastline of Vistula Lagoon from Elbląg Channel to Pregoła River. These diocese borders did not change until the beginning of 19th century.

With the beginning of the 19th century, after the Congress of Vienna, a new division of dioceses within the Prussian Monarchy took place. This was effected by the Pope?s Pius the 7th bulla De salute animarum dated 21st September 1821. As a result of the bulla the entire area of the former Sambia diocese was incorporated into Warmia diocese. Farther joined to the Warmia diocese was also a part of the former Pomezan diocese, so called Malbork officiality, which consisted of 5 regional curacies, the seats of which were the cities: Dzierzgoń, Malbork, Nowy Staw, Sztum and Żuławski. Also Oliwa City, since 1821, at the time of Warmia bishop Józef v. Hohenzollern?s life, belonged to Warmia diocese, where the bishop was a Cistercian abbot. After his death in 1836 Oliwa became a part of Chełm diocese.

Several decades later, as a result of Roman edicts dated 8th July 1854 and 15 May 1859 additionally incorporated to the Warmia diocese were the regions of Kwidzyń and Prabuty. Within these borders Warmia diocese stayed until the end of the First World War. The territory of Warmia diocese was therefore vast: it was streched from Niemen River to Vistula River.

After the 1st World War the Treaty of Versailles changed the map of Europe. This influenced the new shapes of Warmia diocese borders. The Free City of Gdańsk, created by the power of the Versaille Treaty, encompassed also a part of Warmia diocese, namely the deanship of Nowostaw and some neighboring parishes, 18 in all.

Difficult situation after the World War II was brought to order with the Pope?s Paul the 7th bulla Episcoporum Poloniae coetus, dated 28th June 1972. This bulla includes Warmia diocese to the Warsaw Archdiocese and bishop Józef Drzazga was appointed the Bishop of Warmia and the successor of bishop Maximilian Kaller, who had to leave Warmia in 1945 and return to Germany. Formally bishop Maximilian Kaller retained his power in the Russian part of Warmia diocese, meaning: Königsberg and the lands surrounding it. He died on 7th July 1947 in Königstein.

The bulla of John Paul the 2nd Totus Tuus Poloniae Populus dated 25th March 1992 has an epoch-making importance. By the power of this bulla Warmia diocese was uplifted to the rang of a Archdiocese with 2 subdued and newly created dioceses: Elbląg and Ełk.

Warmia Archdiocese today in divided into 33 deanships. The net of parishes includes 245 priesthood outposts. Its territory is largely commensurate with the historical borders of Warmia. 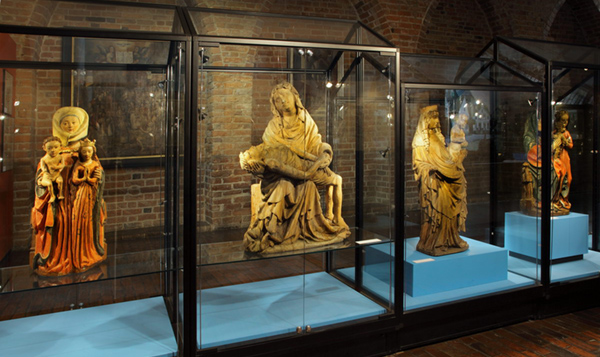 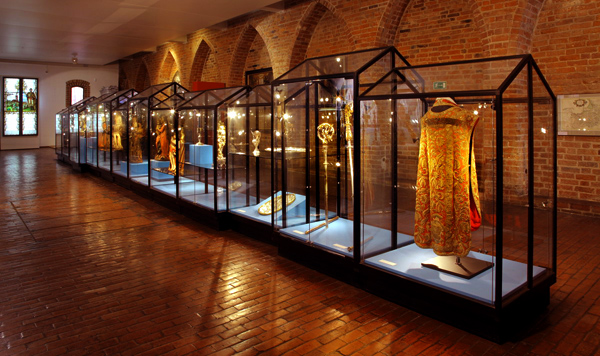