The exhibition will present three areas of the ancient craft of Prussia and Royal Ducal (after the annexation of East Prussia and West), dating from the sixteenth to the nineteenth century. On the ground floor of the former bishop’s palace you will be able to see about 210 items made of tin, about 80 objects of pottery and furniture more than 30 – most of the objects was never presented to a wider audience.

For residents of surrounding Frombork and Braniewo certainly very interesting to find a unique collection of relics from the famous tin once Braniewo center of pewter.

The exhibition is the result of five passionate collectors from Elbląg, Gdańsk and Tczew, which takes adventure collectible for decades, and in the case of 94 – year old professor. Jerzy Wiśniewski (the doyen of Polish collectors) approximately seventy years! 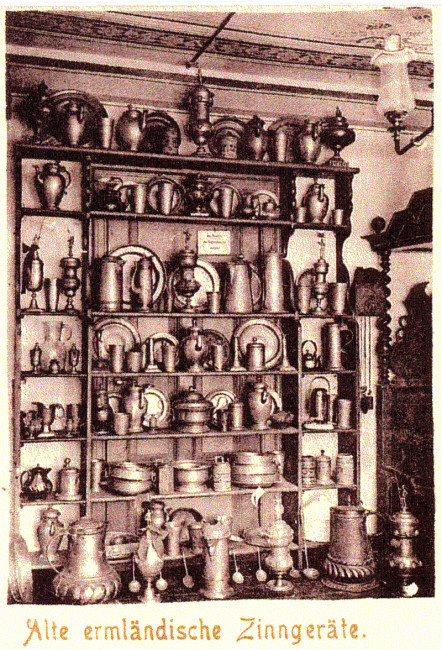 Decorative art of the region Prussia created, thanks to the multicultural community living here, a colorful coexistence stylistic trends occurring in European countries. With time only, parallel to the current trends in Europe, in many fields of handicrafts they produced a local characteristic design such as furniture forms produced in the XVII – XIX century in Gdańsk, Elbląg and Żuławy, typical of Royal Prussia and Ducal form pitchers tin or local imitation ceramics Dutch called. “Delftware”.

Handicraft items for centuries been an object of interest for collectors of the region, and in the nineteenth century the museum. Rich collections were up to the outbreak of the Second World War in the City Museum and Applied Arts in Gdańsk, the Municipal Museum and the Museum of the Fatherland Carl Pudor in Elbląg, Museum Warminski in Braniewo (transferred in 1922 to Frombork in 1933 to Lidzbark Warmiński), or also in Prussia-Museum in Kaliningrad. 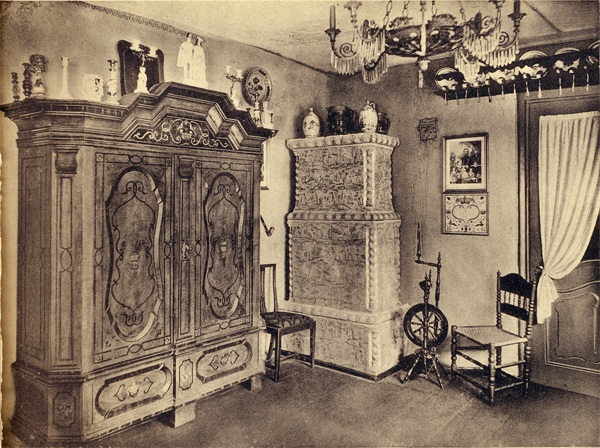 he exhibition at the Museum of the Fatherland Carl Pudor in Elblag, years 20. XX., Heimatmuseum des Verkehrsvereins Elbing E.V., 1929.

Frombork, in the former palace of the bishops of Warmia, the first museum presentation of the local decorative art took place in 1922 when, in June, an exhibition, which was most of the monuments from the liquidated Museum of Warmia Braniewo, including furniture and handicraft items ( including a large collection of tin). These objects were exhibited (as part of the Diocesan Museum) for 11 years, until 1933, when they were transferred to the Museum in Lidzbark Warmiński.

Until the last war, not only in museums or collections collectibles but also in private hands (especially in palaces and manor houses) remained a huge number of objects of the old crafts often performing the role of utility equipment. Armed conflict and unforgiving for the sights of the post-war times led to the destruction or dispersion of this resource.

Some of the outstanding private collections of local decorative art underwent dispersed before, such as. Sold at the auction house Rudolph Lepke in Berlin collections: L. Giełdziński of Gdańsk, Sopot F. Basner, or M. Minkowski Königsberg (auctions in years: 1912, 1929 , 1936). 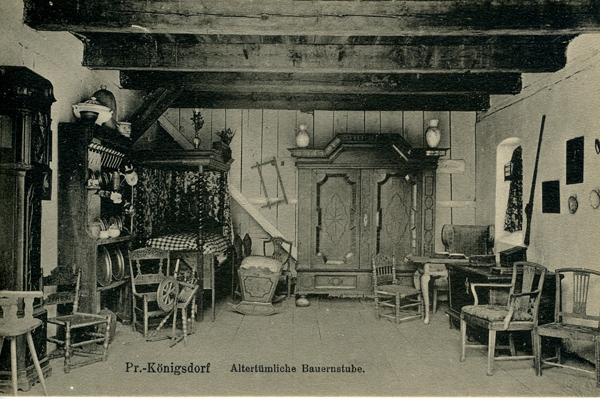 After 1945, the museums of the region, especially museums of Gdańsk, Olsztyn and Elbląg, taking only a small part of the survivors of pre-war collections of decorative arts, started his collection and placement.

Arts and crafts in the old Prussia was already the subject of a number of museum presentation, however, further exposures still reveal hitherto unknown objects and behold the beauty of the old utilitarian objects and craftsmanship of artisans of the region.